The presence of many premium rate number service providers competing with attractive payouts and easy terms makes the business model for IRSF fraud lucrative and easy to implement.

The Communications Fraud Control Association claims that traffic pumping fraud costs victims an estimated $4.73 billion each year worldwide.1 The victims range from individuals who have his or her cell phone stolen while traveling, to small and large businesses. Small businesses that typically have poorly secured phone systems are a common target for IRSF fraud. Here are three examples that illustrate how dangerous IRSF can be for small businesses:

The following diagram describes the IRSF call flow and the money flow. This example illustrates the common PBX hacking fraud attack, but IRSF call flows can be perpetrated in many other ways. The money flows, however, are the same in all attacks.

The goal of this study was to gain a better understanding about premium rate number providers. Who are they? What is their business profile? Over the past year, TransNexus contacted 121 premium rate number service providers to gather information about who they are, the services and number ranges they provide, and the payout rates they offer.

From the survey data collected, a common profile emerges for the typical premium rate service provider. The typical provider appears very small, perhaps, just a few employees. The market is fluid, with multiple providers disappearing and new providers emerging during the months of this study. Many firms appear to be virtual firms with no disclosed location or telephone contact, only communication by anonymous email accounts such as Gmail. Competition among premium rate number service providers appears high. As a commodity service, the primary differences between service providers are the payout rate and how quickly and conveniently funds are remitted.

Premium rate number providers can be located anywhere. However, the UK, is clearly the global leader. It is home to 43% of the 74 providers that disclose their location. After the US, which has the second highest concentration of firms, the geographic dispersion of firms is widespread among European countries (large and small) and a diverse collection of developing countries. The most telling statistic is that 39% of all firms surveyed do not openly disclose their location. 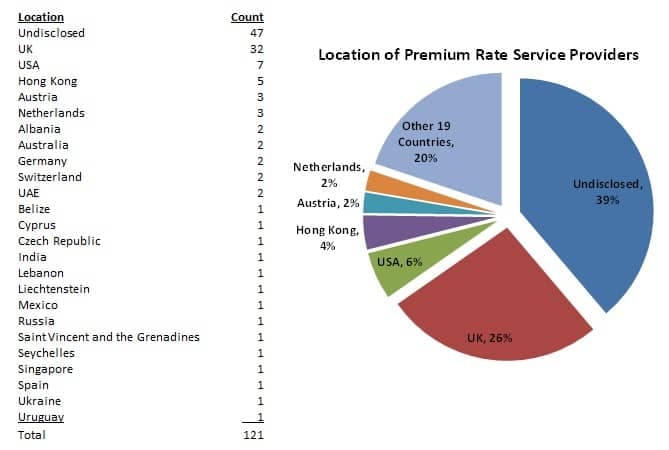 The following list presents the top fifteen destinations in terms of average payout per minute. This list is dominated by satellite service providers. Country code 870 is for maritime services and codes 881 and 882 are for global mobile satellite services. 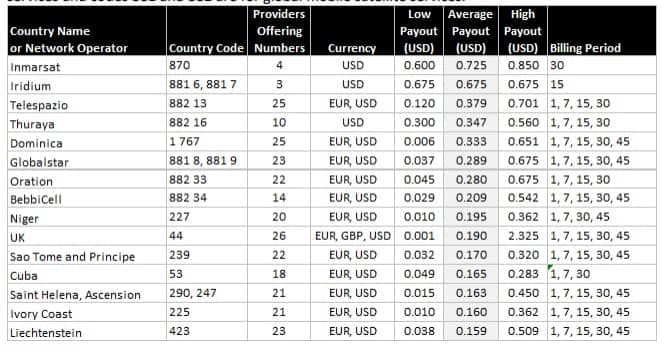 The range in payout per minute can vary widely by country. The UK, Austria and Estonia standout with very high payouts and contradict the common assumption that IRSF is predominantly a problem with calls to developing countries. 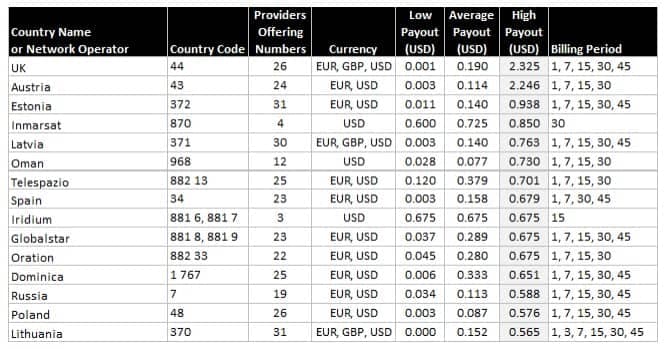 By number of providers 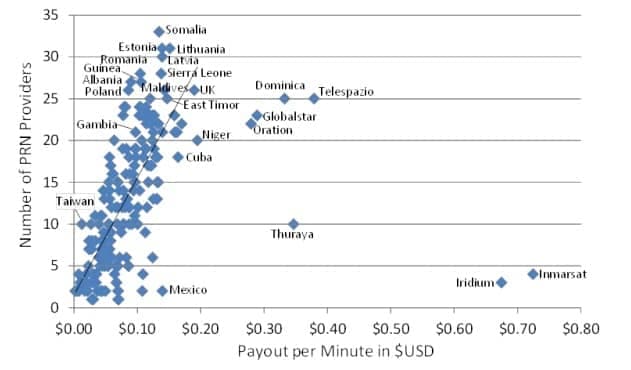 In 2013, the Communications Fraud Control Association published a fraud loss survey for the telecommunications industry. The survey reported that 57% of all fraudulent calls were terminated in the ten countries listed below. The 2013 CFCA results are compared to the data collected in this 2015 study.

For example, in the 2013 CFCA study, Latvia was the number one destination for fraud risk. There were more fraud losses for calls to Latvia than any other country. In this study, Latvia is ranked number four in terms of providers offering premium rate numbers. Latvia is ranked twenty-two in terms of the average payout, and fifth when countries are ranked by the highest payout rate.

The results of this study reveal that the eco-system needed to monetize International Revenue Sharing Fraud (IRSF) is thriving. The market for premium rate numbers is highly competitive with premium rate number providers offering similar services with minimal differentiation. Providers compete for customers in three ways: