The Federal Communications Commission recently issued a proposed rule that is designed to remove the financial incentive for domestic traffic pumping from the intercarrier compensation regime. Here’s how it works, and why it’s needed.

Players in the game

Here’s an image that illustrates the entities typically involved in domestic traffic pumping call flow in the U.S.

Victims include any subscriber whose account has been hacked and used to generate high call traffic to telecom fraud endpoints. Under current rules, the caller pays, so they’re victims of traffic pumping telecom fraud.

Some subscribers call these numbers intentionally without realizing that such calls incur high call rates.

Many subscribers now have phone plans with unlimited long distance, which also shifts the risk of telecom fraud traffic pumping to their service provider.

Retail service providers offer call plans with unlimited long-distance calling, especially wireless plans. And sometimes they must write off some or all the fraudulent charges for customers who don’t have unlimited long distance. So, retail carriers can also be victims.

These are wholesale and retail carriers that move calls from the calling parties’ retail carrier to the CEAs, LECs and traffic pumping endpoints. These include large carriers like AT&T and a wide variety of competitive wholesale carriers. They must pay downstream carriers for call completion. They’re victims too.

CEA providers are a specialized type of intermediate access provider that were formed in the 1980s to connect rural incumbent LECs and other networks, particularly those of IXCs. Much of the recent domestic traffic pumping activity involves call traffic that flows through these CEAs to rural LECs and traffic pumping endpoints described below.

Why are CEAs part of this scheme? Because their presence in the call flow exempts the LEC from FCC rules against access stimulation.

These service providers are the retail phone companies that serve the rural subscribers and traffic pumping endpoints. They require IXCs to connect to them through CEAs, which exempts them from FCC rules against access stimulation.

A LEC is classified as access stimulating if they meet either of these criteria:

These call destinations often play very long recorded messages. They exist ostensibly to provide their advertised service, but they also provide essential endpoints for generating high traffic volume to the terminating LEC, which benefits from high terminating access revenues, which it shares with the endpoint businesses.

Fraudsters commit domestic telecom fraud by hacking into subscriber phones and pumping traffic to the endpoints listed above. They receive a share of the revenue generated from the traffic pumping endpoint businesses.

The current rule, and the loophole

This loophole defeats existing FCC rules intended to stop access stimulation. An intermediate access provider is not part of the definition of access stimulation and therefore is not subject to the rules against traffic pumping.

This loophole is exploited by the following tactics:

Access-stimulating LECs want the CEAs in the call path. That’s how they evade the FCC’s rules against traffic pumping. 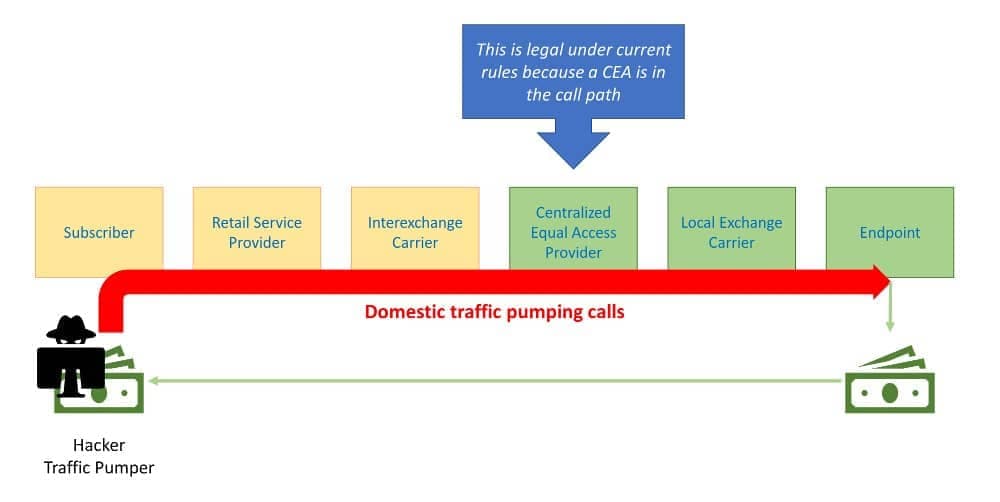 The proposed rule is described in an FCC document: Updating the Intercarrier Compensation Regime To Eliminate Access Arbitrage

The proposed rule changes would require access-stimulating LECs to choose from three options:

Option 1. Bear the financial responsibility for the delivery of terminating traffic to their end office. This means the LEC, rather than the IXC, would pay the CEA provider.

Option 3. Accept the IXC’s choice of an alternative intermediate access provider. IXCs could then choose a least cost route to get calls to the LEC.

These rule changes would remove the arbitrage opportunity by unleashing competition to drive down fees and making all carriers in the call path subject to traffic pumping rules.

Access-stimulating LECs would be required to revise their tariffs to remove any terminating interstate tandem switching and tandem transport charges of their own and begin to assume financial responsibility for all intermediate switched access provider interstate tandem switching and transport charges for traffic bound for such access-stimulating LECs.

CenturyLink recommends shifting financial responsibility to any LEC that declines to accept a request for direct interconnection for terminating access traffic.

We’ve observed an increase in domestic traffic pumping attacks recently. With all the attention focused on preventing international telecom fraud, it seems that some fraudsters are turning to domestic telecom fraud.

The current loophole creates incentives to commit telecom fraud. The loophole should be closed to restore the telephone network to function as a trusted, reliable service.

We’ve added new features to NexOSS and ClearIP to enhance and improve our fraud detection to protect customers against domestic traffic pumping. Contact us today to learn how you can protect your network.