The Five Biggest Takeaways from the NOI on Illegal Robocalls

The NOI has garnered quite a number of responses from both the general public and from organizations that support taking technological measures to stop some types of robocalls in their tracks.

Five major themes or takeaways emerged in the NOI comments:

Reading through over 400 comments, 91% are from the general public. 100% of the public comments express frustration and concern over the amount of robocalls received to individual cell phones and landlines. No comments were filed in support of maintaining the status quo.

Most of the comments were focused on what a nuisance the calls were. However, there are still some people who pay by call received and voicemail listened to, especially those in less populated areas of the country. Daniel from rural Illinois commented that he is charged for every call he receives on his landline. He writes: “Calls that I am unable to refuse would add up to me, losing time for the use of my phone…My cell phone plan doesn’t get service at my rural home. Please consider the lifestyle of those not wishing to spend money on expensive unlimited monthly plans which would also be of little use.”

Also, there was a good deal of concern around the robocaller’s favorite victims: vulnerable populations. Many citizens wrote in to express their concern for family members with dementia, Alzheimer’s, or other conditions that made them more apt to stay on the phone and give away credit card or checking account information. Ultimately it doesn’t seem to matter if the calls are negatively impacting an individual in his or her bank account or if they are just an annoyance, Americans don’t want to receive robocalls.

The chief complaints by the public generally fit into six categories: 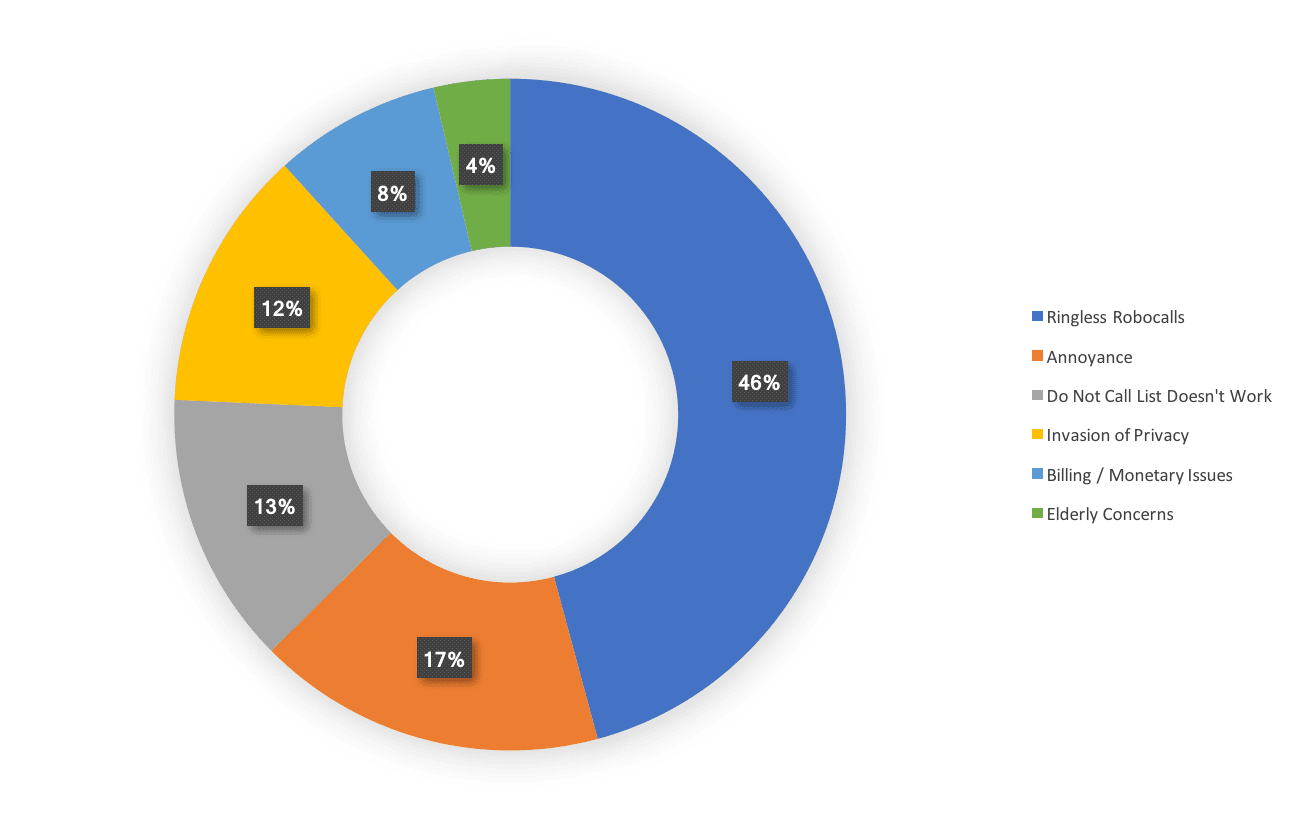 We can say, with confidence, everyone really hates robocalls.

The public responds (forcefully) to the potential of legal, ringless robocalls

The support of ringless robocalls by the RNC coupled with the desire by the RNC to make calls to citizens without actually ringing the phone was met with a great deal of disdain. That disdain, outrage, and disappointment was expressed in nearly half (46%) of the public’s comments in this NOI. Even though this inquiry is set up to get public comment around the methods for blocking illegal robocalls, the news around the RNC’s support for ringless robocalls dominated the comments and illustrate how far even legitimate organizations want to push definitions in existing laws and regulations.

The comments from the general public were nearly universal in their distress and anger around the ability to bypass the phone all together and move directly into a voicemail box. Neil, from Virginia, commented that “robocalls are already a nuisance, but at least I can cut them off as soon as they ring. Now the robocallers want to evade my ability to disconnect their incoming call and send their annoying garbage right into my voicemail, where I’m forced to deal with it.” He certainly wasn’t alone with nearly half of the commenters mentioning this direct-to-voicemail robocall scenario. As of this writing, a decision hasn’t been made around these ringless robocalls but certainly FCC Chairman Ajit Pai has enough information around what the public really thinks about this type of legal maneuvering in order to reclassify a telephone call.

Nearly 40 companies and organizations responded to the NOI

The organizations that expressed concern around the definition of the term robocall all believe it is too broad a term, with only one organization believing the term robocall should be applied to an even broader audience. Consumers Union, a non-profit, consumer advocacy group that prints Consumer Reports magazine, urged the FCC to rewrite the definition of illegal robocall. Their suggested definition is “a call (including any voice message or text message) that violates any law, including the requirements of the Telephone Consumer Protection Act (TCPA), the related Commission regulations implementing the Act, or the Telemarketing Sales Rule (TSR), OR THAT IS made for the purpose of defrauding a consumer, as prohibited under a variety of federal and state laws and regulations, including the federal Truth in Caller ID Act.”

On the other side of the robocall definition debate were the ACA, American Financial Services Association, Electronic Transactions Association, Encore Capital Group, and Noble Systems. They are all concerned that the definition is too broad and could include legal calls made by their organization or by organizations they support. Noble Systems writes that they continue “to object to the FCC’s usage of the term robocall, as this term has different groups and cannot be redefined at this point without causing further confusion.” These companies’ concerns around robocall definition clarity leads into the concerns nearly half of the organizations addressed: the potential of blocking legitimate robocalls.

Organizations express concern around Do Not Originate

While the organizations all fully support the FCC’s efforts to eliminate illegal robocalls, 44% of the respondents have concerns about how the proposed solution (STIR and SHAKEN) may impact their business activities by inadvertently blocking legitimate calls.

Organizations like PACE and the AARP highlighted their concerns around competition and mistaken blocking impacting legitimate consumers. The AARP points out their concern around inadvertent blocking of legitimate consumers’ ability to make calls. In the NOI, the FCC seeks “comment on implementing a process to allow legitimate callers to notify providers when their calls are blocked and to require providers immediately to cease blocking calls when they learn that the calls are legitimate.” The AARP also brings up the issue of legacy technology, pointing out that the FCC should come up with solutions to block calls across all technologies—TDM, VoIP and wireless. The AARP reiterates its support for addressing illegal robocalls but do bring up some interesting concerns inherent in call blocking.

PACE, or the Professional Association for Customer Engagement, also expresses concerns around blocking calls. They believe that “allowing carriers to determine whether a communication is presumptively illegal raises the specter of anticompetitive behavior on the part of carriers and harm to businesses that rely on multiple carriers for day-to-day operations. Any call blocking the Commission chooses to permit should be limited in scope and targeted to reduce calls from bad actors, not legitimate businesses.”

The American Bankers Association (ABA) also supports the Commission but writes that financial institutions often engage in legal caller ID spoofing. Financial institutions are allowed to make calls to their customers that project an 800 number or a local number on the caller ID that may not be the originating number. They do this so the customer can return the call free of charge since the institution is often reaching out because of some concern around the account.

The ABA has highlighted a few areas of clarification in order to maintain its own practice of legal spoofing:

These concerns are also being highlighted by others involved in the new technology, STIR and SHAKEN. In a separate NOI, the FCC has asked many of these same questions in order to develop a framework that works for everyone, business and consumer, to help mitigate some of these illegal calls plaguing the network.

The FCC has opened this NOI in order to bring other options for blocking illegal calls to the forefront but it seems STIR and SHAKEN remain the solution frontrunners. Some companies in this NOI do offer some solutions but they tend to be blocking solutions that the consumer will have to use, instead of a solution that can effectively block the illegal call from entering the telephone network in the first place.

As a reminder, STIR (Secure Telephony Identity Revisited) and SHAKEN (Secure Handling of Asserted information using toKENs) are protocols created to ensure the calling number of a telephone call cannot be spoofed. The FCC is working towards implementing standards for authenticating calls and addressing some of the concerns laid out in this NOI and in other open NOIs around this issue of illegal robocalls. These two protocols, STIR and SHAKEN, seem to be the best solutions at this time and the FCC is moving forward with everyone’s concerns in order to implement solutions in the months ahead.

There is much work to be done in the months ahead. Microsoft points out that “there remains significant work to be done before SHAKEN can be implemented as a reliable authentication method.” However, even as companies point out that there is work to be done around the protocols, they all agree that this is the way forward now. There are other NOIs open around STIR, SHAKEN, and illegal robocalls. TransNexus is hopeful that the next few months will bring an outline of how STIR and SHAKEN will work in a real world setting and how it will all be governed.