Intercarrier compensation refers to the charges that one carrier pays to another carrier to originate, transport, and/or terminate telecommunications traffic.

Although the same or similar facilities are used to originate, terminate and transport all types of traffic, the rates for intercarrier compensation vary based on several factors:

Essentially, ICC shifts money from urban telcos to rural telcos. Local telephone companies now rely on access charges for significant portions of their revenue—in some cases 20% to 40% of total income. This is important particularly in rural areas, where the cost of maintaining the local network is high due to distances between exchanges and lower population densities.3

A multiyear glide path toward comprehensive reform of the ICC payment framework was put into place. The ultimate goal of the reform was bill-and-keep, a system where carriers look first to their subscribers to cover the costs of the networks, then to explicit universal service support where necessary. Bill-and-keep has proven successful in the wireless space and was meant to eliminate competitive distortions between voice providers.

Over the last two years, dozens of U.S. wireline companies and state regulatory commissions have fought back against a multitude of issues stemming from FCC’s nearly 800-page reform order. However, recently, the U.S. Court of Appeals for the Tenth Circuit upheld the FCC’s 2011 reform for the Universal Service Fund and Intercarrier Compensation System. The decision is a blow to incumbents and CLECs who were hoping to retain the ability to collect revenue when terminating calls on their networks from other carriers.

What does the decision mean for ICC?

While several changes urged by rural telcos and their representatives have been incorporated into USF reform, there remain concerns among incumbents and competitors alike on ICC reform and the bill-and-keep methodology that puts intercarrier compensation rates at zero. Although the Appellate Court upheld the bill-and-keep methodology, it left authority over the terms and conditions of reciprocal compensation to state commissions.

The Court also ruled that the state commissions will continue to define the edges of networks, even if there is no compensation for the exchange of traffic at those edges. In essence, the states are left to decide where the zero rate applies. In an email to members, National Telephone Cooperative Association (NTCA) Senior Vice President of Policy, Michael Romano, analogizes the situation as follows:

“Let’s say someone (the Federal Shipping Commission) suddenly mandates that an overnight shipping service like UPS or FedEx must deliver all packages in the U.S. for free. That sounds like a burden, right?”

“But say that the terms and conditions of delivery are defined by each state such that the obligations for UPS start and end within one mile of the ultimate destination of each package. So, you want that package to go to Dallas? Sure, FedEx can take it there, and they’ll even do it for free because they have to–but you will have to get it to the outskirts of Dallas (per the Texas Shipping Commission) to get that zero rate. If you want to hand it off somewhere other than Dallas, well, that’ll cost you. So, while the Court says carriers have to terminate calls for free, the states have the authority to decide where free starts.”

The future of intercarrier compensation

That continued engagement has already begun. NTCA, Frontier, the Independent Telephone and Telecommunications Alliance (ITTA), and Windstream met with FCC staff in June to discuss ICC reform. The group pointed out that the USF and ICC reforms are closely tied together and were intended to be coordinated. But the two are no longer proceeding at the same pace.

The group suggested that the ICC rates remain at their current level, rather than continuing with scheduled reductions, until USF reforms are completed and implemented. The group noted that the rate reductions scheduled to take effect July 1st would come without the expected recovery mechanisms or other sources of USF support.

For all of the talk about Intercarrier compensation, it remains to be seen how it will affect the inevitable IP transition. In an all IP situation, carriers will have access to any destination, without the need for local tandem points of interconnection.

The FCC has not explained how the current inter-carrier compensation system will apply during the multi-year network transition or how it will apply going forward in the all IP world. With so many policy issues still undecided, it is no surprise that regulatory questions are now beginning to complicate the proposed transition experiments.

To further understand the future of Intercarrier compensation, TransNexus has analyzed termination cost data for typical retail providers of nationwide access and transport termination services. As the following chart demonstrates, the average rate per minute has already dropped by 50% since January of 2011. Today the rate per minute is close to three tenths of a cent. If the rates continue to follow this trend, we predict that rates will fall even further in the next three years, potentially as low as 0.00150. 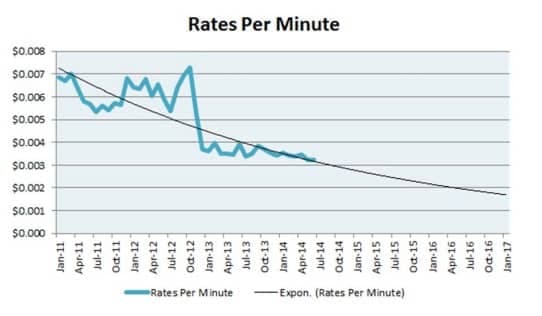 Clearly, the market is trending towards rates of zero. In an all IP world, we can expect that Intercarrier compensation policy will become less relevant because termination fees will naturally decrease toward nothing.

Kim joined Tele-Tech in 1993 and manages sales, marketing and product development efforts. Advanced training includes several years’ attendance at the Alliance of Telecommunications Industry Solutions Ordering and Billing Forum. Kim contributes to publications such as Telecommunications Magazine, Phones Plus Magazine and the Network Manager’s Handbook. She also delivered the Keynote address at the 2008 Conference of the International Association for Information and Data Quality. Kim is a recognized business leader, who was recently honored by The Charleston Regional Business Journal.