Today, many telecommunications companies are expanding their VoIP service by acquiring new networks. This can be an excellent strategy for quick growth. However, it comes with the challenge of integrating the new networks and equipment while keeping costs low.

Specifically, many growing service providers face issues of deteriorating Quality of Service (QoS) and increasing use of core network bandwidth. These issues can mean unhappy customers and increased costs.

This white paper acts as a primer on how to improve QoS and network efficiency for growing VoIP service providers. It focuses on ways to direct call traffic through your network using Geo Intelligence, an awareness of the customer’s physical location.

At TransNexus, we want to give our customers real life examples from which to work. For help, we turned to an expert in enterprise communications, Ryan Delgrosso. Ryan is the CTO and chief network architect at Phone Power and is responsible for the design and construction of their nation-wide telecommunications network. Prior to joining Phone Power Ryan had extensive experience in both the network security and finance industries.

“In 2013, our company was growing rapidly through acquisition, and that was leading to major inefficiencies on our network,” said Delgrosso. “Using Geo Routing strategies, we were able to integrate three different vendors based networks while drastically reducing our needs for expensive bandwidth.”

The Phone Power network consists of three Points of Presence (POPs): two on the west coast and one on the east coast. Each POP consists of one or more softswitch, a redundant pair of routing servers, and two Session Border Controller (SBC) clusters which support customer access and peering interconnect. The three POPs are connected by a Private Core Wide Area 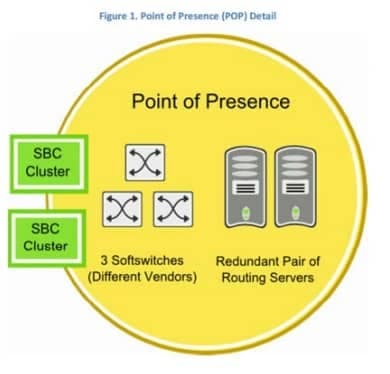 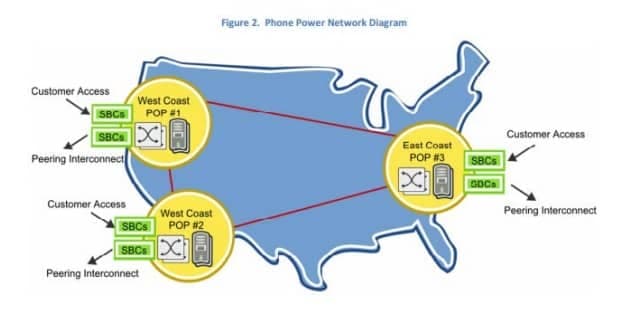 Before implementing geo-DNS routing, Phone Power customers had their static locations defined in the softswitch based on where they initially registered for service. This technique makes sense for a network with one softswitch and a single POP.

But this simple approach cannot benefit from the improvements in call quality that become possible when multiple points of network access are made available. For example, if a customer originally signed up for service on the west coast, but then moved to the east coast, their phone calls would still access the Phone Power network from the west coast POP.

As shown in the following illustration, the ingress call leg needlessly traverses the Internet across the USA when a much shorter path to the East Coast POP is available. 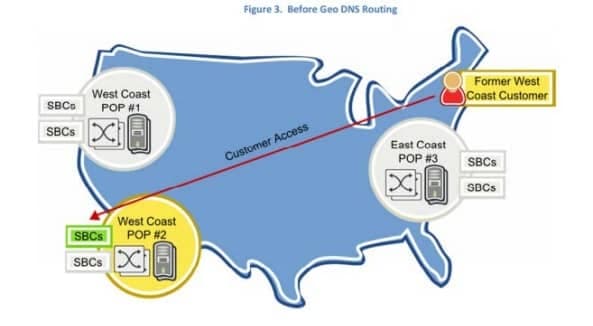 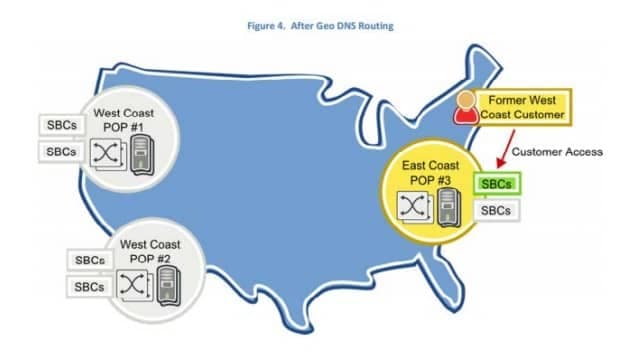 DNS SRV is the abbreviation for Domain Name Server Service (SRV) record. A SIP phone would typically request an SRV record in the form of:

The DNS message indicates the SIP phone wants a list of services that handle SIP over UDP for sip.phonepower.com This request from a customer on the west coast might get the following information in a SRV response:

A customer making the same request from the east coast would get a similar response except the priority values would be swapped to indicate East Coast POP#3 as the first choice with the West Coast POP#2 as a backup.

The SRV response also includes a TTL, or Time To Live, value. The TTL value (not shown in previous example) indicates how long the SIP phone should store or cache the access POP address.

Keeping the TTL value low forces the SIP Phone to resend the DNS SRV frequently which enables the service provider to move customer access around the network quickly to relieve loads for maintenance, traffic management or other reasons.

When Phone Power expanded their west coast based network with the acquisition of their POP on the east coast, core network bandwidth usage increased dramatically. The problem lay in their default round-robin Least Cost Routing (LCR) strategy. Calls were routed outbound to the lowest cost carrier but with no preference for peering interconnect location.

Approximately two thirds of all calls were needlessly routed across the core IP network to another POP for termination peering. One third of all calls were routed to a POP on the opposite side of the country from the media ingress. This lead to inefficient core bandwidth usage and less than optimal call quality. 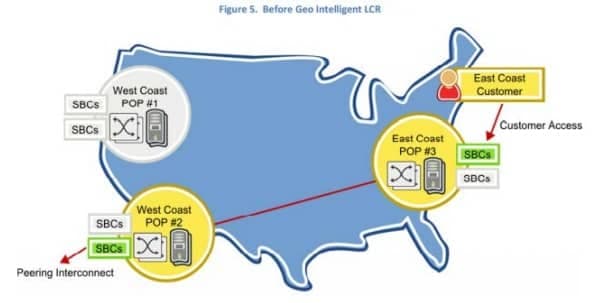 Phone Power implemented Geo Intelligent LCR by configuring their TransNexus OSPrey routing server to choose routes based on both the least cost carrier and the peering interconnect location closest to the [7] point of media ingress.

To do this, the OSPrey routing server is configured to route the call based on the connect IP address in the Session Description Protocol (SDP) message rather than the source IP address in the SIP INVITE. (An example in a following section explains why and how this technique is used.) 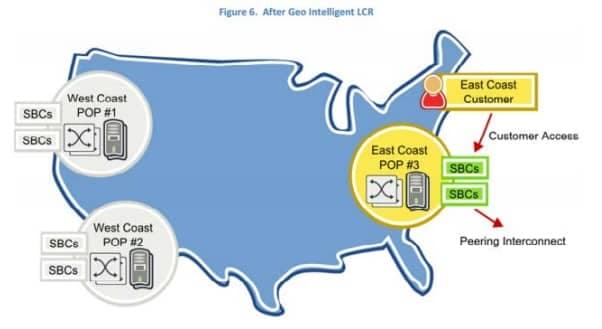 The following network diagram illustrates a typical VoIP network similar to the Phone Power network. A Source Gateway (1.1.1.1) is the ingress point for calls into the network. The Source Gateway may be a PSTN to SIP (Public Switched Telephone Network to Session Initiation Protocol) gateway accepting calls from the PSTN or a Session Border Controller (SBC) accepting SIP calls from SIP phones on the Internet or from other SIP networks. 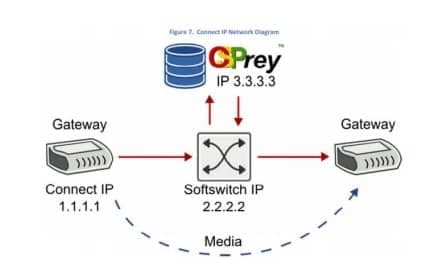 Below is an example of the SIP INVITE received by the OSPrey routing server. Notice that the Source Gateway IP address (1.1.1.1) cannot be found in the SIP INVITE message. The reason is because the softswitch acts as a Back-to-Back User Agent (B2BUA) and replaces the Source Gateway IP address (1.1.1.1) with the softswitch IP address (2.2.2.2). Since the source IP address is not available, geo-routing is not possible and simple routing solutions use the round-robin technique to load balance calls among peering points of presence. 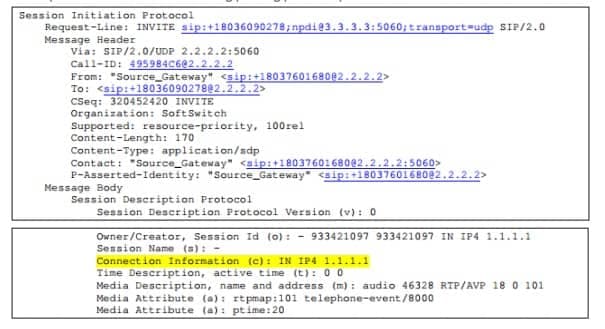 The OSPrey routing server, however, can be configured to use the Session Description Protocol (SDP) Connection IP address (highlighted in yellow) to identify the Source Gateway. The SDP Connection IP address identifies the IP address of the media source, not the source of the SIP signaling. Since this Connect IP address is unaltered by the B2BUA (softswitch) it can be used for Geo Intelligent routing and enable the bandwidth savings and improved network efficiencies realized by Phone Power.

“Prior to implementing our geo-intelligent strategies, only about 30% of our calls were being routed locally. Now, that number is over 80%,” said Delgrosso. “The TransNexus OSPrey routing server allows us to tap into a new layer of geographic flexibility.” 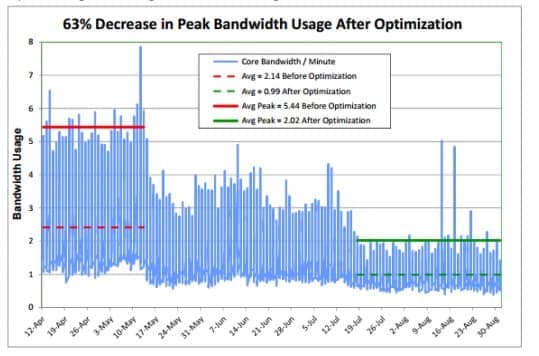 BIND (www.isc.org) and PowerDNS (www.powerdns.com) are both well-established open source projects for Domain Name Servers (DNS). Both servers offer a backend database that may be used for geo-location routing.

The NexOSS VoIP Routing, Operations, and Billing Support System is a suite of integrated back office applications which complement the operation of OSPrey Route Servers.

NexOSS saves time and money with intelligent routing solutions. This includes no-loss Least Cost Routing that supports up to 100,000 translations, as well as routing by geo-location, Quality of Service, time of day, day of week, and customer specific routing.