Least cost routing is concerned with analyzing dial codes and the rates carriers charge to complete calls to those dial codes. Unfortunately, most carriers to not quote rates for US termination by dial code. Instead they quotes rate in terms of OCN, LATA and Tier. Read how to handle this for least cost routing.

So the first step in least cost routing analysis is to normalize carrier rates from OCN, LATA and Tier to E.164 dial codes. 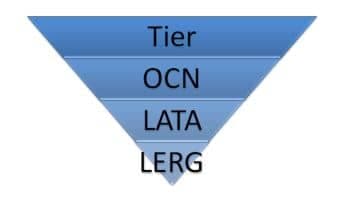 The entire system is a regulatory relic of the AT&T breakup in 1984. LATAs, Local Access and Transport Areas, were created as areas within which a divested Regional Bell Operating Company is permitted to offer exchange telecommunications and access services. These LATAs are drawn around markets, which do not necessarily conform to existing state or area code borders.

There are at least 3,936 OCNs or Operating Company Numbers. An OCN is a four-place alphanumeric code that uniquely identifies providers of local telecommunications services.

Finally, Tiers are the last abstraction used by carriers to quote rates. Carriers often have six to eight rate tiers per LATA. Tiers are not standard and every carrier’s tier structure is different.

The LERG (Local Exchange Routing Guide) is a database which lists all the E.164 dial codes for each OCN within each of the 223 different LATAs. Manually normalizing carrier rates using the LERG is too big a task for even the most industrious technician. In order to assure that every call is correctly routed, providers must use routing software that automatically normalizes and routes calls using LATA, OCN, and Tier.