Carrier solutions for the enterprise

Global health conglomerate Johnson & Johnson reached a vital crossroads in 2005. Its ability to manage a sophisticated telecommunication network and keep expenses in line had become a source of concern.

“We had difficulty managing budget variances and identifying cost drivers, many of them difficult to decipher,” says Peter Tarhani, Johnson & Johnson’s manager of Global Networking. “Throughout our organization, we had a number of different telecom payment and management processes for handling and paying a large number of diverse invoices. We weren’t managing it properly.”1

Enterprises are looking for new ways to cut costs and gain transparency into their networks. Increasingly, they are adapting techniques and tools traditionally used only by telecom carriers. In this white paper, we will examine the explosion of growth in enterprise telecommunication networks, as well as the strategies innovative companies are using to manage them.

The growth of enterprise telecom networks

“Most companies like Johnson & Johnson have underdeveloped skills in the telecommunications space because the entire industry is exploding with new devices that are fast becoming the staple for corporate communications networks,” says Joe Basili, president of NetworkTrendsNow, which surveys and monitors the world of communications management. He adds that managing such a network itself imposes “heightened risk across the board if not done right.”

According to the SEC, the top 100 employers in the US average over 200,000 workers.2 That translates to over 100,000 phone lines within each company. At the same time, FCC documents show 99% of telephone carriers have 100,000 or fewer lines in operation.3 Many non-telephone enterprises are now finding themselves managing a phone network larger than most carriers. 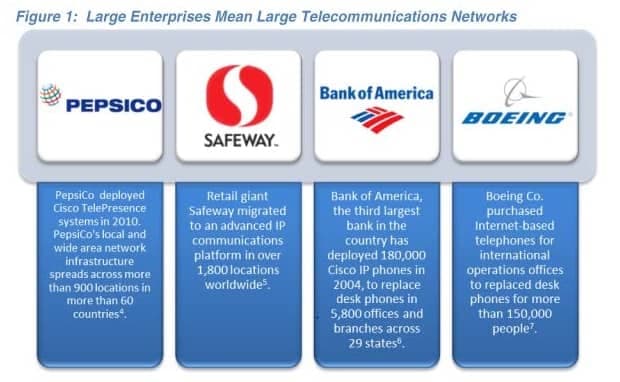 Enterprises with sophisticated telecommunications networks face major challenges when it comes to understanding and managing telecom costs. On average, companies report that 23 percent of their telecom invoices contain errors on a monthly basis, according to the Aberdeen Group. And that's just the mistakes that get noticed.

“Even telecom managers can have trouble deciphering a telecom invoice,” says Lisa Maclay, consulting telecom analyst for Hospital Corporation of American, a $30.6 billion healthcare facilities operator. Most, however, don't even get that once over. They're mailed directly to accounts payable, which reviews them for any increase in charges.

Most erroneous charges will come in at less than one percent of the bill to avoid detection and get approved. And while one percent may seem like loose change, it can add up to hundreds of thousands of dollars given the average corporate telecom services bill of $2.9 million dollars, says Hyoun Park, collaboration and integrated communications research analyst with the Aberdeen Group.8

In 1971, Disney realized the need to effectively manage their sprawling telecommunications networks. Their solution was to create Vista-United, their own telecommunications company meant to service all Disney resorts in Florida and Disney-planned communities such as Celebration, FL and the Disney Vacations Clubs in Hilton Head, SC and Vero Beach, FL.9 Disney’s solutions, however, are an outlier.

Short of creating an entirely new CLEC to manage their networks, a growing number of enterprises are now simply borrowing tools traditionally used by telecom carriers. These tools can dramatically decrease internal costs, and allow enterprises to secure their networks.

Least Cost Routing, or LCR, is the process of analyzing, selecting, and directing the path of outbound communications traffic, based on low rates. For years, telecom carriers have relied on Least Cost Routing technology to keep margins low and stay competitive.

For enterprises, this technique can make a significant impact on communication costs. Consider a company with one headquarter and more than one branch-office site in Europe making daily long distance calls to contact customers located all over the world. Since many telephone carriers provide telephone rates depending on geographical areas, the competitive telephone market may be used to reduce communication costs.

Instead, enterprises who implement Least Cost Routing should look for a tool that automates the creation of an LCR table and can work as a switch on their network, routing calls between several different carriers, based on termination costs. LCR allows the telephone system to automatically route the long-distance call to the most economical telephony carrier network, saving money on the long-distance bill and reduces the employee's effort in making the calls.

Basic dial plan management for interoffice calling and off net calls can be a major operational challenge for enterprises with many branch offices.

For example, Macy’s Inc. operates more than 850 department stores in 45 states, the District of Columbia, Guam and Puerto Rico under the names of Macy’s and Bloomingdale’s. These stores are connected by a private IP network which may be used for both data and voice communications.11 Managing separate dial plans for every branch office is a major challenge that is dramatically simplified with a centralized routing server.

Enterprises can also take advantage of centralized routing servers which hold enterprise-wide dial plans for calling between different enterprise locations and off-net calls to long distance providers. These servers are widely used by carriers to quickly and effectively route calls within their networks.

However, enterprise IT departments also benefit greatly from the server’s ability to move control of telecommunications back to the core network. Centralized routing servers allow IT departments to easily manage moves, adds, and changes within the telecom network from a single point, rather than making changes on multiple PBX or SBC devices.

The Private Branch eXchange (PBX) at each office can query the OSPrey dial plan for direct, peer-to-peer routing to the destination across the enterprise Wide Area Network (WAN). With OSPrey's centralized dial plan management, enterprises can retake control of your telecom network, reduce routing errors, and save money by consolidating your local and long distance carriers.

A salesman at a Bangor, Maine auto parts store arrived at the office early one morning and noticed that all eleven of the company’s phone lines were lit up. As he was the first to arrive, and the only person in the building, he knew that something was amiss.

As it turned out, the company’s private branch exchange (PBX) had been hacked. In a single night, the hackers had racked up a long-distance bill that was roughly double the company’s average monthly phone bill.12

A similar incident was recently reported by a Los Angeles software company, who found that scammers hacked into their PBX and placed 4,390 long distance calls in under an hour (that’s over 150 calls per minute).13

Telecom fraud is on the rise. A recent report from watchdog group, the Australian Competition and Consumer Commission (ACCC) detailed over 83,000 fraud complaints in 2011. That is nearly double the number of complaints from 2010, and quadruple the number from 2009.14

Fraud is common in industries across the board. Most enterprises who are victims of telecom fraud don’t ever realize that they have been hacked, and the problem isn’t caught by VoIP providers sometimes for days. A single fraud event can cost an enterprise anywhere from $5,000 to upwards of $50,000.

That is why it is essential that enterprises protect their own telecom networks. New tools, already being widely implemented by telecom carriers, are able to detect spikes in call traffic and unusual call patterns.

Enterprises can implement fraud detection software that works with their routing software to monitor and re-route potentially fraudulent calls. As enterprise telecom networks grow in size and sophistication, successful management requires a toolkit borrowed from telecom service providers and carriers. By implementing software traditionally only used in the telecom industry, enterprises stand to see significant cuts in the communications costs, and savings that impact their bottom line.

As enterprise telecom networks grow in size and sophistication, successful management requires a toolkit borrowed from telecom service providers and carriers. By implementing software traditionally only used in the telecom industry, enterprises stand to see significant cuts in the communications costs, and savings that impact their bottom line.