With services in 23 different countries, ACN needed a solution that simplified operations while maintaining the regulatory and business requirements of each country.

Prior to 2013, ACN had been using two independent TransNexus least cost routing platforms, one in North America and another in Europe, with each running on bare metal hardware. ACN’s goal in 2013 was to centralize the routing management of the two TransNexus platforms while simultaneously virtualizing the entire system.

“We appreciate vendors such as TransNexus that are nimble and focused. TransNexus has always been very responsive to our technical support needs and requests for new features. TransNexus is the only vendor that we have found to integrate routing and telecom fraud control in a single solution.”

Founded in 1993, ACN is the world’s largest direct seller of telecommunications, energy, and other essential services for residential and business customers. ACN provides the services people need and use every day including phone service, Wireless, Energy, merchant services, Television, Home Security and Automation, and High Speed Internet. ACN operates in 23 countries with offices located throughout North America, Europe, Asia and the Pacific. For information on ACN’s home-based business opportunity, visit www.acninc.com.

The ACN network provides Voice over IP (VoIP) services in 23 countries and has direct IP interconnection agreements with multiple carriers throughout North America and Europe. ACN uses multiple BroadSoft BroadWorks servers to provide VoIP services for both their residential and SMB customers. Peering and customer access is managed with Oracle Acme Packet Session Border Controllers (SBCs).“Each country is effectively a different operating company with a different set of routing requirements and regulations – it is a complex network to manage,” said Shane Gingell, Director of Engineering at ACN. “We needed a way to simplify our operations while maintaining the local regulatory and business policies required by each country.” 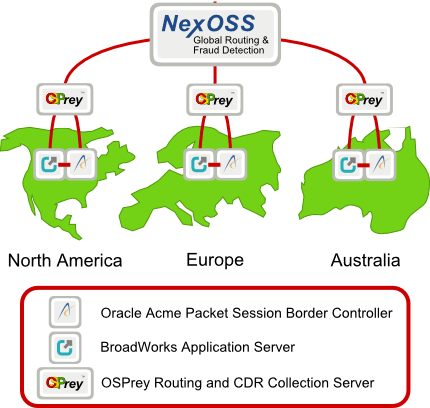 Prior to 2013, ACN had been using two independent TransNexus least cost routing platforms, one in North America and another in Europe, with each running on bare metal hardware. ACN’s goal in 2013 was to centralize the routing management of the two TransNexus platforms while simultaneously virtualizing the entire system. Gingell adds, “Customizing routing policies by country is a competitive advantage. We can tailor our services to match local demand while minimizing our costs. As an example, some of our carrier interconnect agreements require the termination of both local and national calls in an operating country. TransNexus allows us to differentiate routing beyond just least cost options.” In addition, centralizing ACN’s TransNexus platforms globally has allowed the company the ability to more efficiently manage and support the network while providing the same level of support in all regions.

The TransNexus least cost routing solution consists of two software platforms: NexOSS and OSPrey. NexOSS is a centralized suite of applications for managing VoIP networks. NexOSS can create multiple routing tables based on the needs of local operations while leveraging all the termination carriers connected to the ACN global network. Calls may be routed based on any combination of time, day, cost, quality and geographic preference. In addition, the software supports multiple currencies for routing and rating. Carrier rates based on US dollars can be included with carrier rates based on euros for determining least cost routing.

The OSPrey platform is a real-time routing and Call Detail Record (CDR) collection server. OSPrey servers offer high performance and are designed to be distributed throughout the network for high availability. NexOSS replicates routing tables to the OSPrey servers, which operate as SIP Redirect servers. OSPrey servers provide both routing instructions and CDR collection for the BroadWorks and Acme Packet SBCs.

Telecom fraud control is a growing problem for VoIP users worldwide. For example, the telephone system of an unsuspecting business user will get hacked by a fraudster. The fraudster then makes tens of thousands of dollars in fraudulent calls. The business owner is completely unaware of the fraud until they receive their bill. To address this problem, ACN is using NexOSS to quickly detect telecom fraud based on both BroadWorks and Acme Packet CDRs. As the centralized point of CDR processing, NexOSS scores each CDR for fraud risk in near real time. Fraudulent calls can be detected by source IP address or calling number and blocked automatically in the OSPrey server. In addition, NexOSS can also detect fraudulent calls by BroadWorks GroupId or UserId and automatically block those callers using the BroadWorks Open Command Interface for Provisioning (OCI-P) application program interface (API). When a fraud trigger is activated, NexOSS sends an alert to the ACN Network Operations Center (NOC) and provides an easy to use web interface for viewing the CDRs that activated the fraud alert. Depending on the trigger, ACN has the ability to investigate further or block any potential fraudulent calls.

“NexOSS fraud detection has dramatically lowered the risk of telecom fraud for our customers,” said Michael Brousseau, VP of Network Engineering at ACN. “We can automatically block fraudulent calls without interrupting the normal call activity of our customers. In addition, the credit control feature allows us to monitor the spend rate of each customer by hour and day. When a credit control alarm is activated, our NOC can identify the excess usage by source IP address, calling number, GroupId or UserId and take corrective action.”

“ACN has been a great customer for TransNexus because they are always pushing new innovations,” said Jim Dalton, founder of TransNexus. “As an early adopter of SIP peering they were our first customer to use dynamic least cost and quality of service routing with Oracle Acme Packet SBCs. More recently, ACN has been a driving force in our development of new fraud control techniques for the BroadWorks application server. We value their deep understanding of VoIP technology and new feature requests.”

Brousseau added, “We appreciate vendors such as TransNexus that are nimble and focused. TransNexus has always been very responsive to our technical support needs and requests for new features. TransNexus is the only vendor that we have found to integrate routing and telecom fraud control in a single solution.”