On June 28, Yost’s office sent warning letters to ten voice service providers to inform them about the “laws, regulations and enforcement actions that may bear upon their business activities.”

The FCC sent cease-and-desist letters to eight voice service providers identified through traceback as having carried these calls. These letters warn them to stop carrying suspicious traffic with in 48 hours and report the steps they take to the FCC. These providers include:

The Commission also issued a public notice authorizing all U.S.-based voice service providers to cease carrying any traffic from these providers.

Pursuant to section 64.1200(k)(4) of the Commission’s Rules, we hereby notify all U.S.-based voice service providers that they may block voice calls or cease to accept traffic from certain originating/intermediate providers listed in this Notice without liability under the Communications Act or the Commission’s rules.

“Our lives are plagued by robocalls like a swarm of flies,” Yost said in a news release. “This particular operation prompted more than 1,600 unwanted-call complaints to my office. It’s time to get out the fly swatter.”

“Billions of auto warranty robocalls from a single calling campaign. Billions!” said FCC Chairwoman Jessica Rosenworcel. “Auto warranty scams are one of the top complaints we get from consumers and it’s time to hold those responsible for making these junk calls.” 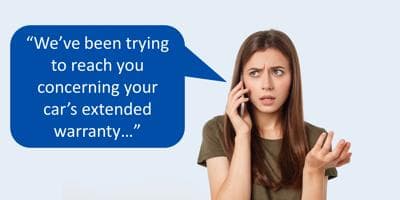