SIP Analytics® is a method to detect and prevent telecom fraud and unwanted robocalls. It checks each call in less than a second, before the call begins. It’s incredibly fast.

Sometimes a picture is worth a thousand words. In this blog post, we share a chart showing SIP Analytics in action blocking unwanted robocalls during the day and two high-speed fraud attacks at night for a TransNexus customer.

How Fast is SIP Analytics? 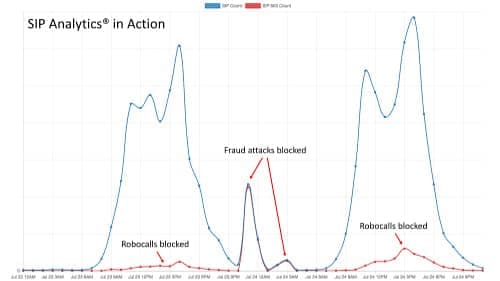 This chart is a screenshot from our ClearIP software. We've added labels that show where ClearIP blocked robocalls and telecom fraud attacks. The chart shows call traffic over a two-day period. The blue line counts total calls at each point along the timeline, and the red line shows calls that were blocked, either because they were identified as robocalls or a telecom fraud attack.

The vertical axis is the number of calls (values have been hidden), while the horizontal axis shows the timeline.

Along this timeline, you can see the blue call traffic line increasing during normal business hours on July 23 and July 24, when most people were active. You can also see the red line increase slightly as robocalls were identified and blocked.

You can also see a sharp increase in call volume around 10 pm on July 23, and again around 3 am on July 24. These were two telecom fraud attacks on this carrier’s network. The red line shows call blocking activity, which mirrors call volume from these attacks.

Almost all the fraud attack calls were quickly detected and automatically blocked.

Some telecom fraud management systems detect fraud attacks by analyzing CDRs (call detail records). The problem with this approach is that a CDR is created after the call ends. Until then, expensive fraudulent calls are running up a substantial bill that nobody wants to pay. That’s too slow, and too costly. It's like locking the barn door after the horse has already been stolen.

SIP Analytics checks each call before it begins. This takes less than a second. As you can see, it's incredibly fast.

At TransNexus, we believe that every carrier should protect their network and their customers from telecom fraud attacks and unwanted robocalls by using SIP Analytics—the fastest telecom fraud prevention method available.

SIP Analytics is available in our ClearIP and NexOSS software products. Contact us today to learn how quickly you can prevent telecom fraud.